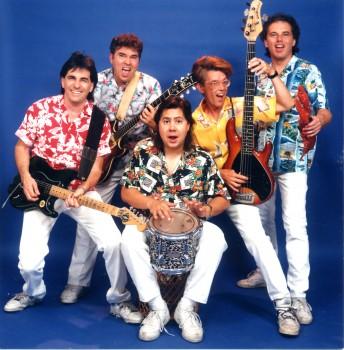 The HD’s are five multi-talented musicians that combine high-energy music, colorful costumes, celebrity impersonations and fun-filled audience participation to transform any party into an extraordinary event.

There are occasions where bigger can be better. HD’s Plus can fill the bill by adding one to three female vocalists and two to three horns for an even more entertaining event. With themes from Jump Swing to Girl Groups to Disco to 80’s Glitz, this band could be the right choice for your distinctive tastes.

When the ultimate is the only option, The Band’s Funharmonic (a 16 piece big band) is the bands promise of high energy fun and entertainment. Imagine five HD’s flanked by six horns, four violins and a diva. Talk about filling a room with sound — this is it!

Pepsi
“…the best party we ever had!…The group was terrific…”

Century 21
“You really know how to work the audience and get them up and dancin’.”

Nissan
“…as I’ve heard it said before They are the “Best Damn Party Band in the Universe”.”

Xerox
“You kept’em singing and dancing for eight glorious weeks!”

Daily News
“…saved the best for last. …really get the crowd rockin’ and it’s a great time.”

The Learning Tree
“Their energetic performance got everyone up and dancing immediately. …impossible to sit still while they were performing!”

Check out this video of the H-Ds in action!