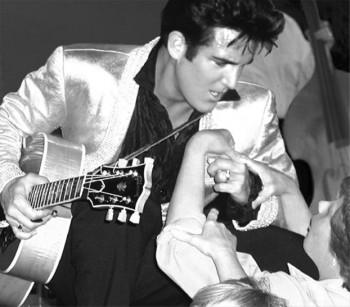 Originally from the Pacific Northwest, where he was an air-personality at the top 40 FM radio station Z-FUN 106 and a drummer, Scot has lived in Los Angeles since 1990. While pursuing his career as a musician/actor (and having been a musician and a big Elvis fan all of his life) he started doing a 1950s’ era Elvis show as a way to survive the lean times. The result was a surprise to Scot… what was meant as a part-time “gig” to supplement his income blossomed into a full-time career.

Because of his uncanny resemblance to the young “King” and his ability to sing, strum a guitar, and swivel his hips, his live show has taken him all over the world to places like Japan, Hong Kong, Singapore, Malaysia (where he had the privilege of performing for the King and Queen), Mainland China, Australia and several countries in Europe and South America. He regularly plays concert dates across the United States. As Elvis, Scot has appeared in music videos with Sheryl Crow, Faith Hill, and Tasmin Archer, as well as on the FOX TV sitcom “Partners.” Scot has also been heard as the “Resident Elvis” on the highly rated Los Angeles morning radio show “Mark and Brian” on KLOS FM.

“Top Elvis Impersonator Scot has got it going on, his voice is so uncannily like the King’s you’ll think you’re in Blue Hawaii… He has all the signature Presley moves, — the independently rotating thighs, the swiveling pelvis, the droopy bedroom eyes – down to the science.”
The Tennessean, Nashville